And the Pope Tweets 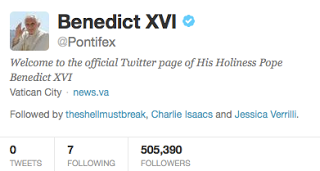 There is a certain humor, and wisdom, in the Vatican announcing yesterday that His Holiness the Pope will be tweeting under the handle @Pontifex.

More than 2000 years ago the Roman Empire perfected the art of absorbing local deities and cults as they conquered new countries. Let the people keep their Gods and rituals and they are easier to control.

As the Christian Church emerged from the shadows into power in the 4th century it did the same thing. Keep the local festivals and rename them — just think on the pagan customs we celebrate on my favorite holiday Christmas Day/midWinter Festival. And reuse the titles of authority.

In ancient Rome the priests of the (pagan) Roman religion were called Pontifex. The high priest was called Pontifex Maximus and then, with Augustus, the Caesars took on the title. They were heads of state and the religion. So by the time the Emperor became Christian, and the Bishop of Rome was the top priest of the new religion, he absorbed the ancient title: Pontifex Maximus. High priest.

Today we have new cults to be absorbed, Twitter being the cult de jour, a subset of the cult called Social Media. How best to absorb a people who live in the land of Social Media. Absorb our practices – Tweeting – absorb our culture – 140 characters in the moment – and use an ancient name that will resonate in the hidden recesses of our cultural memory. And gather more than half a million followers in 48 hours.