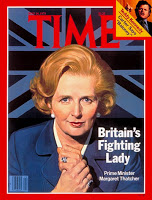 Whatever your politics, Margaret Thatcher was one of the greatest leaders in modern English history. I cry today, remembering England in 1979 and how bravely and radically she transformed the country with her powerful leadership and vision for the possible future of the UK.

In the Winter of Discontent which struck the UK in 1978-79 we had continuous strikes of angry union workers and a weak, ineffective government — coupled, I remember, with unusual cold and very deep snow. The country, which had run a global empire and stood up to Hitler, was on it’s knees in political turmoil with a defeated population, high taxes, bad food and no way out.

Margaret Thatcher was the powerful force that turned the country around. Her leadership was unstoppable. She had a clear, determined vision for what the UK could be again, and no one and nothing was going to get in her way. By restructuring taxes and privatizing the nationalized industries she forced the country to compete on the world markets. Yes, there was severe unemployment as a result, but short of a deep socialist (short-sighted) agenda that unemployment was coming, one way or another, and she had the courage to get ahead of it.

Watching Mrs Thatcher on stage a few years after she left power confirmed what I had come to believe watching her in the media. She was on stage with Gorbachev and George Bush Snr (Reagan had already succumbed to Alzheimer’s by then) talking about how they worked together to reform Soviet politics — which resulted in the fall of the Berlin Wall. She had a huge brain, charm, and an iron will. Her clarity, intellect and wit were unmatched, even by her peers who were themselves global leaders, and I was inspired.

I have admired her determined, uncompromising leadership since 1979. For 30 years now when I am asked who has inspired me I have said Margaret Thatcher.  It’s as true today as it ever was.

It’s not the first time I’ve cried for her. I cried for her – posted here – when I saw the film Iron Lady about her rise to power, fall from power and fall into dementia.