The bravest person I have known 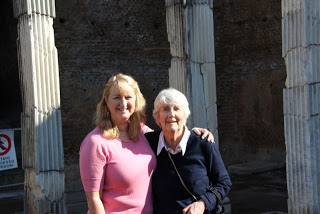 It’s 107 days since my mother died and I think of her continuously. But the pain is easing to a dull ache in my chest and I can look at pictures of her and smile, and I have to believe it will get easier from here. I find myself thinking of the strangest memories, mostly good, some bad where I feel guilty for being self-absorbed, but most of all I keep remembering her courage.

I spoke about her courage in the eulogy I gave in the church for her memorial service. My sister Sue and I stayed humorous and positive in our eulogies so I couldn’t speak much about her unfathomable courage in the face of cancer as it ravaged her. Every time I want to complain about an ache, or a pain, or an inconvenience now I try to stop myself and think of her last few months which she braved never saying one word of complaint. Talk about a role model.

For my friends who see this who knew her – here’s my eulogy to her. The bravest person I have ever known, throughout her whole life.

“Mummy was the quintessential
lady. Polite, charming, perfect manners, able to make engaging conversation
with anyone and put them at ease. A well-trained diplomat’s daughter and the
English gentlewoman many of you described in your lovely letters – we want to
thank you for those.

But she was not only a lady. Underneath she was a pioneer, she had
a great sense of humor, she grasped life with both hands and she was
extraordinarily brave.

When Mummy went up to Oxford
she was only the second woman to ever read engineering at the University. She
was good at maths and when she graduated she took a job as an engineer with
Marconi where of course she met Daddy. We have a picture of her, terribly young
and pretty, in a smart 1950s summer dress, in the days before safety glasses –
running a lathe.

She went off to America with
my father where they both had engineering jobs, but when my sister was born she
stopped work and, with my father working hard and traveling a lot, she raised
us both thousands of miles from family and with no help — a true daughter of
the Raj. But when my parents went back to England she went back to work part
time and then, when we were old enough to leave alone in our holidays she went
back to work full force in London – as a technical consultant with Logica,
traveling for her job and leading teams. She could have stayed home and taken
care of Daddy – sometimes I think he wished she did – but she had a brain and
wanted to use it. She was a quiet pioneer, never one to blow her own horn, but
a pioneer nonetheless and her determination to work, and raise us to be career
girls, made a deep impression on us both.

Mummy had a lovely sense of
humor – the twinkling, mischievous kind and a beautiful smile to go with it. When
my parents came back from California in 1965 Daddy had a good job with a
company car, but the purchase of a second car for Mummy had to be economical.
They bought a Morris Minor which my mother lovingly called Galloping Gurty. Why
you may ask? Well this was an exciting car to drive in as a kid. You could see
the road through a hole in the floor, the gear box was broken so the gear stick
was held in place by a rubber band and the car would lurch marvelously. She
made it fun for us – and it was even more romantic when a fly took up residence
in the car and she named him Romeo because he must be in love with her. As a 6
year there was nothing odd at all about a fly being in love with my mother
because everyone else was in love with her too.

She used her sense of humor
to make a deep impression on her two American grandchildren … and their table
manners. Exasperated with her 8 year old grandson’s manners one day she asked
him what he would do if the Queen came to dinner (because being Mummy she had
of course had dinner with the Queen). Sebastian replied that he would have
perfect table manners but he wanted something in return and a deal was struck.
The Queen (Granny) came to dinner one evening and the children pulled off
immaculate table manners. And so, a week later, Granny fulfilled her side of
the bargain and came to a Medieval dinner, sharing haunches of roast meats and
bread with nothing but a sharp knife and her hands. She made her point but with
a smile.

And, without question my
mother was the bravest person I have ever known.
Sue has already described
for you our parent’s love of travel. But until recently they had missed a spot.
When Mummy first got cancer she told me she wanted to see Pompeii before she
died. So a year ago the three of us, Daddy, Mummy and me went to Italy for an
idyllic week where I was reminded of her incredible, quiet bravery. We had not
realized the physical challenge that 18 inch high Roman basalt pavements would
present. It turns out you can’t see Pompeii and Herculaneum without navigating
an obstacle course. But she was quite determined and with my father on one
side, and our handsome Italian guide on the other, murmuring “piano, piano”,
she spent the whole day going up and down steps — loving it and never
complaining, even though I could see ever single step was hard and tiring and
scary for her.

Many of you talked in your
letters about her bravery facing cancer. The treatments, and the progression of
her disease in the last 4 months, caused her significant pain and illness. And
yet she never, ever complained. Stoic does not even begin to describe how she
dealt with being ill.

But most of all she really
lived. She lived life to the full and never more so than in her lifelong love
affair with our father Frank. Mummy fell in love with a man from a different
background, with no money, who was handsome and kind and who her parents
definitely did not approve of. He helped her see that she could live a
different life, away from her mother and stifling expectations — and she
married him in 1957 and never looked back.

They went to America and had
a terrific time as young parents in California, living a dream life for 8 years.
They made happy homes with absolutely lovely gardens. They raised two girls,
they accepted and became good friends with two foreign son-in-laws, and then helped
us raise four outspoken, strong willed, smart grandchildren together who they
adored. They worked to make ends meet at the beginning, and enjoyed their
retirement together right to the end. We used to joke that even though we were
all working we had to move our schedules around to see them once they retired because
they were so busy!

Throughout their marriage we
were never in any doubt of Mummy’s love for and loyalty to Daddy, even when he
was driving us kids crazy. She loved him completely for 55 years, he adored
her, and they were very good friends.

Were Mummy here she would
tell us all she had a marvelous life, with very few regrets, and that we need
to have a stiff upper lip and remember that. She had a tone of voice for the
three of us, Daddy, Sue and me, which she didn’t use very often that we knew
meant business and so Mummy, we’re going to do as you would tell us to now and
celebrate your marvelous life.”