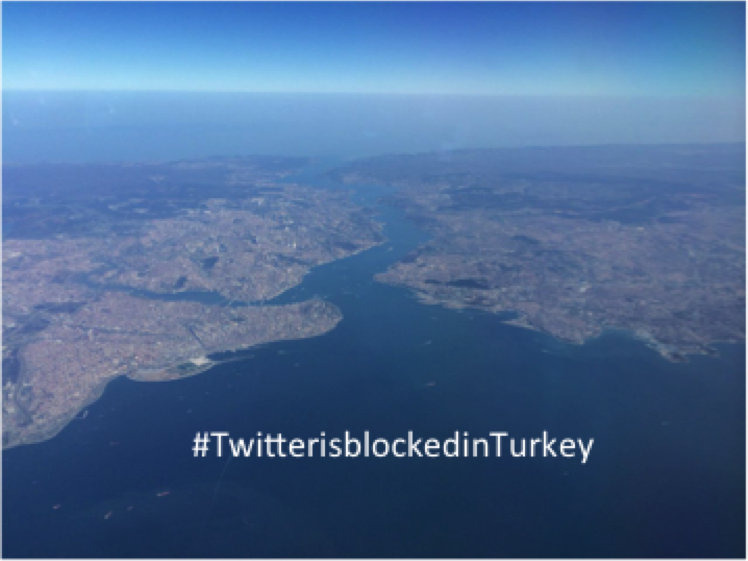 There’s a lot written about “social selling” in tech these days, and how to use Twitter to engage your prospect, but this week we are all seeing just how trivial a use of Twitter this is in comparison to the power it can have on a global scale.

I flew from New Delhi to Istanbul a few days ago and as I flew the PM of Turkey,  Mr Erdogan, shut down Twitter in Turkey. I was in the air, reading the news on line (36,000 ft up) on Turkish Airlines as he put this decision into action. My plane at this point was somewhere over the Caspian Sea and the signal was pinging through a groundstation in Georgia (according to my analysis with Google maps at that moment) and so I could still see the Tweet stream almost up until landing in Istanbul.

And as I watched the hashtag #TwitterisblockedinTurkey soared! (check it out with Twitter search)

My view coming in to land…

Original and thought provoking art appeared within minutes as the suppression unleashed creativity. And of course most users figured out how to get around the ban using a direct DNS and texting – even spray painting the instructions on how to bypass the block on walls so everyone can see.

By Sunday the government had blocked Google DNS directly but the internet is too pervasive and flexible to shut down quickly, as Turkey’s government is finding out. The tech-savvy are working around the ban with VPN and anonymizing sites like Tor.

But why? What’s really behind all this? I’ve heard as many reasons as people I ask, and I am asking everyone I meet. One of the wonderful things about Turkey is how open and friendly the people are, and they speak their minds. With elections coming up in 6 days it’s probably a mix of all the reasons we are hearing — corruption, mobilizing the rural conservatives to vote, creating tension to show power — and above all a desire for control to try to change the outcome of the election.

The US dept of state has called this “21st century book burning” but in Turkey this is a case of history repeating itself (telegraph was the equivalent in the Turkish war of independence). Sadly, the actions of the government will set back Turkey’s bid to join the EU, which would be good for both Turkey and the EU on many levels.

Freedom of expression is a fundamental right. It’s something we take for granted in the US and sitting in a remote mountain village of rural Turkey this morning I am acutely conscious of how precious that right, and the freedom to speak my mind is. I am choosing not to use VPN to access Twitter today, but I cannot imagine living in a world every day where I had to worry about my actions on line and whether I am taking political and personal risk when I express myself.

My heart goes out to the people of Turkey who want to be free, and live in the modern world in a high functioning democracy. Their press is still free but their country is divided. I hope and pray they navigate through the next few weeks and months safely — and still free. 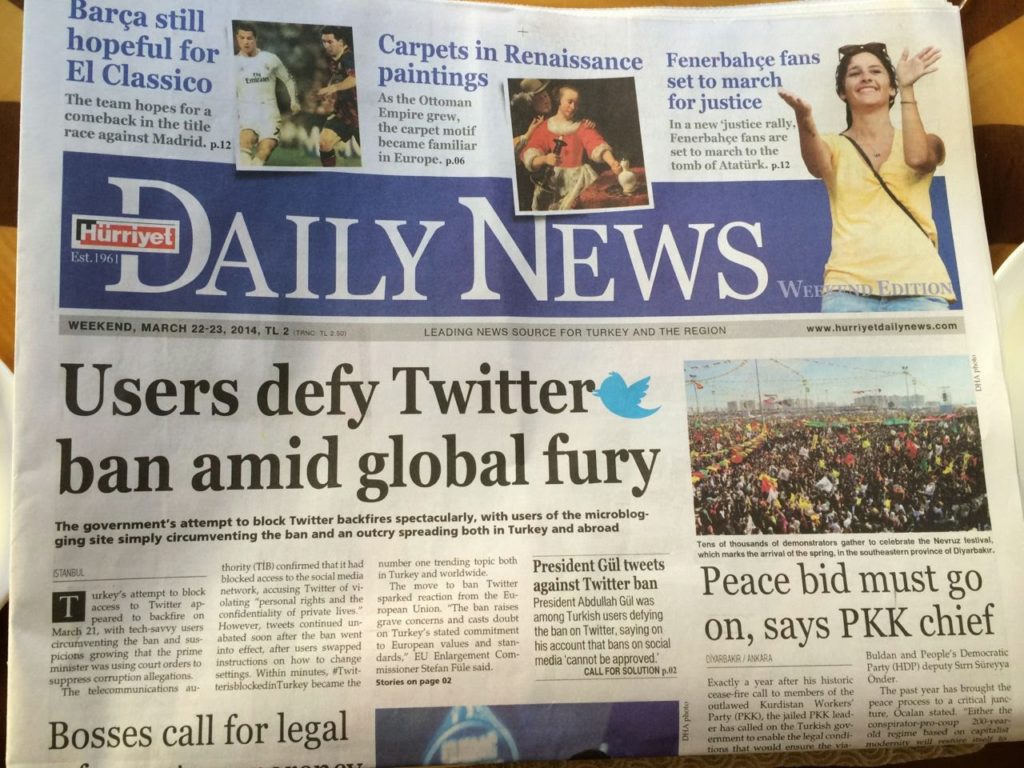 The newspaper our first morning