Sales is a Team Sport 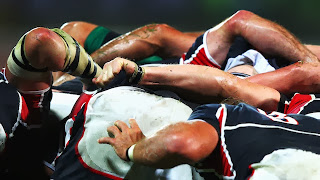 Sometimes sales culture glorifies the lone sales rep: the road warrior who goes out and hunts, slays the order and throws it, still bleeding, on your desk, seeking your praise like a big game hunter standing over his kill’s rapidly cooling dead body.

Is this how your best guys—your top performers—sell? Or do they view sales as a sport that’s won as a team?

Now, I’m the girl who hates sports on TV, who reads a book during Super Bowl parties (except during the ads of course) and has never been to a live football, soccer or basketball game. So I’m simply not a sports fan. But I love watching a sales organization plan, play and win a deal as a well-trained team, each with his or her own role to play.

Hunting and winning the giant enterprise deal first of all takes a team lead: the sales rep on the ground who owns the account. She’s expected to know every aspect of the deal, to lead and choreograph every play, coach every other player on their role, put them in the right room with the right person and plan through what to say when. This rep is accountable for every detail 24/7—they get the glory, but they live or die by the deal.

Then there’s sales management. Carrot and stick, reviewing every play, coaching every move. Willing to show up whenever, wherever to keep the deal moving. Able to manage the CEO and the CFO through the ups and downs of the deal.

There’s the sales engineer—the showman who captures the customer’s imagination up front and answers all the thorny questions. He’s responsible for establishing the value and the match between your capability and the customer’s business need. And he works closely with the customer success lead who stands in front of the customer towards the end of the sales cycle and commits to being on point to ensure the success of the implementation with them.

Sometimes R&D leadership gets involved, especially if you’re doing any integration with a product team or IT, and sometimes your own IT gets involved responding to questions about SaaS delivery, security, response times…

In the end, everyone has a role to play, and they all depend on each other to play those roles well.

When I look at my own sales team I can see the high school and college sports training coming into play. We have several high school quarterbacks, a minor league AA baseball player, several college-level soccer players, a mountain biker who competes on a team, a Junior Olympic badminton player and several college swimmers. Even our runners like to form into teams for our summer triathlons.

Clearly, sports experience is not a requirement for the job, but training in how to work well in a team is – because, in the end, sales is a team sport. And the end result of great teamwork is killer results!